A few days ago, Google announced the launch of Keen, an Area 120 project (Google’s workshop for experimental products), in collaboration with People + AI Research (PAIR) by Google, which is dedicated to human-centred Artificial Intelligence systems. The idea is pretty simple, as Search Engine Journal explains in their piece Google Creates a New Source of Traffic With Keen: “Keen actively searches and suggests relevant content to users. A search engine is passive. It waits for someone to ask it a question. Keen is proactive.” And so in Keen, we would determine what we’re interested in, and we could curate and save the content we find, the content found by our friends, or recommended by the machine learning algorithm.

If we wanted to establish an analogy, the user would use the search engine in the same manner as they do channel numbers on a TV remote. As vague as it might be, they already have identified a search intent, and the search engine works to satisfy it with a particular result. Keen would be similar to channel hopping, but smarter, because it learns as you use its interface, and it shows you the channels (or content, in this case) that you could be more interested in, before you look for it. This way, Keen would present itself as a new traffic and popularity source for websites.

There are people who are comparing this project to Pinterest, because it allows you to organise your favourite links on any subject in folders, or “keens” (which in Pinterest would equal to “boards”) and share them with whomever you want, thus entering the social media ground. You can also follow the “keens” created by other users. As a matter of fact, the initial idea of Keen was born as a result of a married couple requiring a method to share their interests in a more efficient manner. CJ Adams, Keen’s cofounder, and his wife wanted to dedicate more time to things they are passionate about, and the first stage of this journey consisted in searching for information on the Internet. As he himself put it, it was then when “we realised that gathering related ideas, resources and links together allowed us to invest more time into our shared passions in the real life”. However, what makes this proposal different from Pinterest is that Keen would feed from other Google’s vast resources, i.e. the Search Network, News, and Discovery. 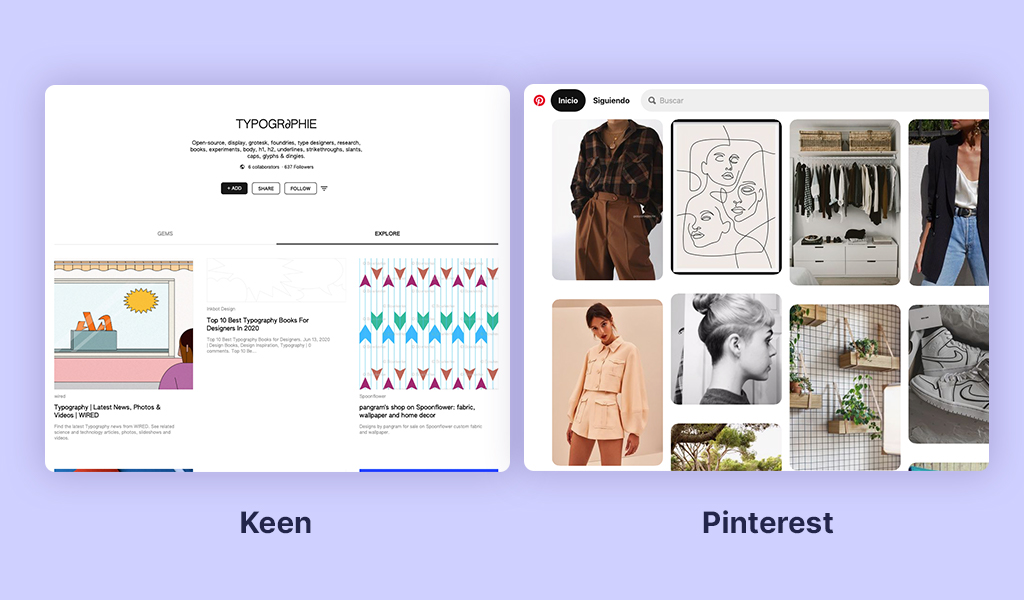 Will it survive? Place your bets

While this idea isn’t new, as content repositories have taken many different shapes and colours, and have existed for many years, the information over-saturation we are currently exposed to could have laid the perfect playground for this type of initiative to flourish and become more pertinent than ever.

Nevertheless, there is someone who is already writing the date of death on Keen’s tombstone, in the well-known Google Graveyard of projects that never came through or were unsuccessful. And this isn’t the first time that Google is attempting to enter the world of social media, to be later kicked out through the back door. If we read some of the reviews left by Google Play users, the most common phrase is that “it has potential” (together with many improvement suggestions and some praise). The time will tell whether this potential will help it survive, or if we will soon see this project next to the guillotine icon. If you try it, let us know in the comments.