What are Web Components?

If you haven’t heard of them until now, keep reading, because the next tag you don’t recognise in the HTML will probably be a web component, because they allow developers to make up new HTML tags, with their own features and client-side code encapsulation, something which wasn’t possible up until now.

What web components consist of

The web components specifications began their development a couple of years ago, although some of the technologies they use started even earlier. They are considered to be a revolution in the industry of web development, with regard to reuse and client-side code encapsulation, because they allow us to encapsulate HTML, CSS and JavaScript code, in a way that it can’t be affected by the code of the page containing it. If we want to modify the style of a web component from outside its code, we can do it, but we’d have to do it on purpose.

They are easily to recognise because they must always have a hyphenated name (see the following example of a web component that allows us to add Google’s maps):

As you can see, the developer can add the properties they want to the web component.

It is also possible to extend the features of existing elements. For example, the following component extends the features of a text field inside a form, allowing its validation:

Web components extending native elements can be recognised by their “is” attribute, which should carry the name of the web component with its hyphen as its value.

What are they used for?

We’ve already seen that we can use web components to encapsulate the use of external JavaScript APIs, such as Google Maps, and to extend the behaviour of native elements.

Another use we can get out of them is to add semantic tagging or even content. For example, let’s imagine we have the following web component for the products of an online shop:

This web component could generate the following code in the user’s browser, for each product we add in this way:

Even with just one product we can see that the web component requires less HTML, because less code is repeated and it adds the necessary microdata for Google to recognise it as a product.

The most common application of web components is to make use of JavaScript libraries easier, in order to make tabs, slides, carousels, responsive images, or any other type of feature requiring the usage of a specific HTML format, in conjunction with a JavaScript library and CSS code.

If you want to find out about other application yourselves, the following link includes a list of rather useful components.

How are they used?

To be able to begin using a web component, we only need to import it from inside the <head> tag of the page that is going to use it, through the following tag:

Inside this piece of HTML we will have all the HTML, JavaScript and CSS code it needs to work.

Currently, not all browsers support all the necessary technologies for it to work. However, there are three frameworks, which allow us to make them interoperable between all browsers using polyfills, while making their development easier at the same time. These frameworks are:

Web components are not a technology in and of itself, they are based on the combined use of four technologies that can be used independently, which I detail below:

It is likely that this short explanation doesn’t make it clear how this composition is created, so if you are interested, I recommend you to take a look at the following W3C chart and this interactive example: 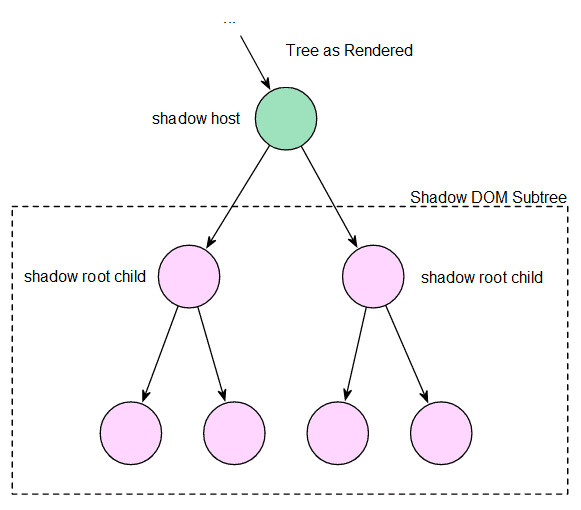 And so, to create a web component we enter Shadow DOM inside a Template of a Custom Element, which is imported to a page. A task that is not at all easy, if we don’t use the frameworks I mentioned in the previous point, due to the implementation differences in each browser.

Web components need to run JavaScript in almost all of the technologies they use, but apparently Google is improving indexing via JavaScript execution, allowing web components to get indexed. Although, as with any new technology, it is always likely we will run into issues. Have you experimented with web components yet?