Progressive Web Apps: what are they and why are they going to improve my site’s traffic?

Google coined the term ‘Progressive Web App’ (PWA) in late 2015, to name web applications, which are indistinguishable from mobile applications. Besides promoting and encouraging their development, they also established at the same time the specifications a website had to fulfil in order to qualify as a progressive web app.

Google is strongly invested into these technologies, because the company has seen how users are increasingly becoming more loyal to mobile apps than to websites, and the Web Applications 1.0 standard was conceived as the best way to turn the tables. However, this isn’t something new, and as a matter of fact, this idea started developing back in 2005, when the Web Applications 1.0 standard was conceived within newly-created WHATWG, a standard that later became HTML5.

Each time, users are increasingly more loyal to mobile apps than to websites.

‘Progressive’ from Progressive Web Apps was taken from the progressive enhancement development strategy. It is used to deal with functionalities that aren’t available on all browsers, so functionalities are added starting from the most basic ones, to ensure that a website is still accessible even if its more advanced features aren’t enabled.

Google has elaborated a long series of checkpoints a website must fulfil to be classified as a PWA, and you can see this checklist at the following link: https://developers.google.com/web/progressive-web-apps/checklist. As you can see, some checkpoints are there to provide computer engineers with something that us, developers, call functional requirements. They dictate what an app can do. Other checkpoints are non-functional requirements, for example, a good user experience, performance, security, etc. This means that a PWA can offer not only a mobile app’s features, but it also must be perfectly implemented.

Google provides us with the Lighthouse tool, to guide developers through tons of requirements that a website must fulfil to be considered 100% PWA. This tool can be used as a Chrome extension, or it can also be found in the Audits tab of the Chrome DevTools console. Another way to use it is through a command line, by installing it from the Node.js development framework’s package manager.

The most noteworthy characteristics a Progressive Web App must fulfil

To store URLs in cache API Cache is used (it uses Cache Storage), and for other data, IndexedDB. Web Storage (Local Storage and Session Storage) aren’t used, and neither are any other storage APIs, because they aren’t accessible from service workers. The accepted space depends on the browser and available storage space. Big amounts of information are only allowed prior permission request. 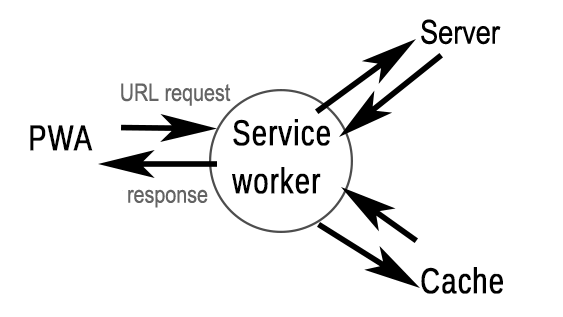 Additionally, if certain requirements are met, Chrome will display a banner suggesting the installation of the web app (Opera has already announced it will also provide this option). Currently, these requirements are: your website must be visited by a user twice, with at least 5 minutes in between each session; registration of a service worker and a manifest.json file with several mandatory parameters (name, short name, icons of at least 144px, and home URL).

The developer may capture the moment in which the browser starts displaying the banner to launch it at a more appropriate time, because this way there will be more chance that a user will choose to add the application. It can be done, for example, when a user has completed a purchase or a booking, or we can simply place a prominent button on our website’s interface, so that they can add our app whenever they want.

The following link provides an example of a PWA generator by Microsoft, which creates the manifest.json file for our website by entering the parameters:

Some recommended WPO techniques are AJAX, or API Fetch, as it is called now. Google recommends to initially display the app’s shell, modifying its main content during browsing with API Fetch. In the future I will talk about the indexability issues this poses, and SPA (Single Page Applications) frameworks, which are useful when we use this structure, and if they are not implemented correctly, we will have non-indexable pages.

We do not know yet whether in the future we will see PWAs in other stores, such as Google Play or Apple’s App Store. However, if it does happen, Google Play is a more likely candidate, given that they are actively promoting PWAs and integrating them to Android, whilst Apple isn’t too big on free apps.

And finally, keep in mind that your website doesn’t need to get 100% on Lighthouse. To reach such a level of excellence is hard. Nevertheless, by just implementing some requirements from Google’s checklist we will already be able to notice an improvement in traffic; for example, through Push notifications, the possibility to add a shortcut to the home screen, and especially, functionalities concerning our website’s speed and user experience. With respect to the latter, it’s necessary to point out aspects concerning cache download with service workers and browsing with API Fetch or AJAX.