Let’s immerse ourselves into the world of Chinese social media. If you thought that Twitter, Facebook or YouTube were the leading websites from Lima to Beijing and everywhere in between, you were completely mistaken, because in China they have their own equivalent services of these social networking sites.

Some stats before we start

Before we start talking about Chinese social networking sites, first I would like to provide you with some interesting data. Not only this Asian giant is special in its own idiosyncratic way, it’s also evident that its user volume speaks for itself.

There are over 567 million Chinese social media users.

Chinese Internet users dedicate 46 minutes daily –on average– to browsing social media. If we segment them by their age, users between 26 and 30 years old are the most active (30%), and there are more male netizens (57%) as opposed to female users (43%).

If we compare China and the United States in terms of Internet users who are registered on at least one social media site, China comes first with a booming 91%, followed by USA with a 67%. We could say that Chinese people are huge social media fans.

The answer to this question is… it depends. We need to keep a few things in mind when we talk about Chinese social media, because:

At this point, we can say that in Mainland China Facebook, Twitter and YouTube have less users than their domestic equivalents. However, we must keep in mind that most foreigners who live there, and the Chinese who are or wish to be more in touch with the rest of the world are frequent Facebook users, albeit in secret, as they access the platform through Virtual Private Networks (VPN).

There are some good news, though. A new limited area was created with the establishment of Shanghai’s free-trade zone in September 2014, where users were allowed unrestricted access to foreign social media websites.

This pie chart, published in April 2013 by the Leading Social Media Observatory (CIC), shows exactly what we were talking about with regards to multiplicity and competition amongst Chinese social networking services. 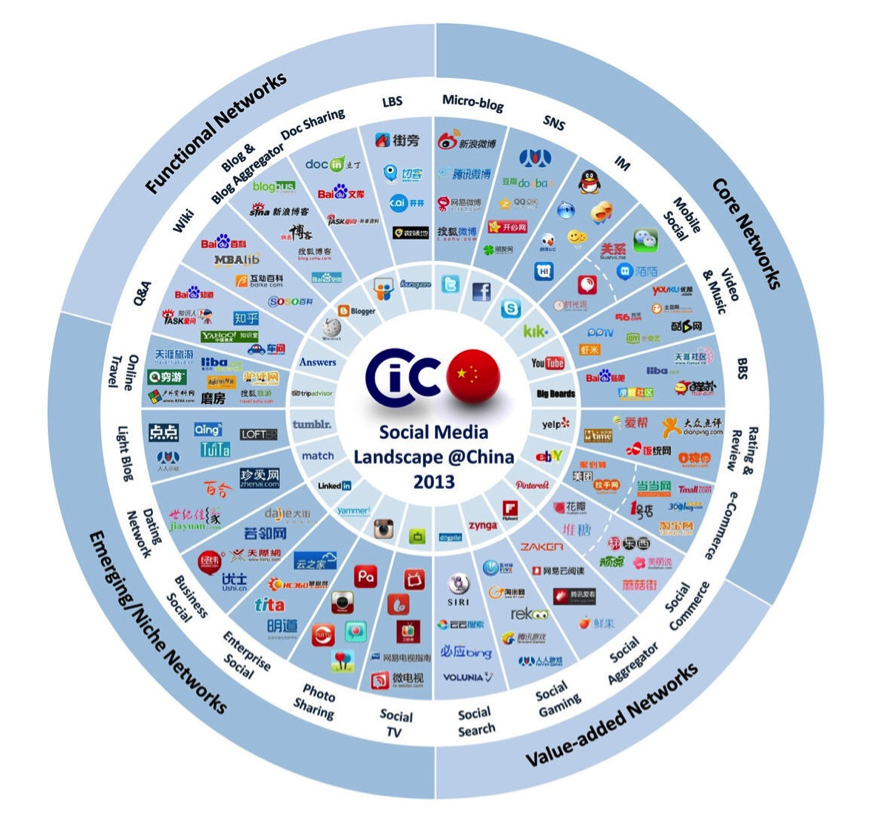 Out of all these services, we would especially like to point out –due to their user volume– the SNS (social networking services) and microblogging websites.

Amongst the SNS, Qzone is the absolute leader with more than 712 million users, followed by PengYouWan (which translated from Chinese means “Friends’ network”), with an approximate number of 259 million users. Both these websites belong to the same company: Tencent.

YouTube also has its own substitutes in China. We’d like to give a special mention to Youku and TuDouWan (“potato network”). They are aimed at music and video sharing, but also –and this is important– they offer a free streaming service with popular tv shows, programmes and movies within their catalogue.

Last, but not least, Weixin is a rather popular messaging service (and another one of Tencent’s products), which in Spain is known as WeChat. And then there’s also UshiWan, which is similar to LinkedIn.

Weixin kind of works as a WhatsApp substitute, but with certain SNS features, namely a wall with updates and a user profile. UshiWan is a professional social networking site with over 400 million users, publicised under the slogan “Ushi: my connections, my advantages“.