ASO is the acronym for App Store Optimisation. It comprises a variety of techniques, which aren’t as broad or complex as SEO is, but they are still worth knowing about, in order to boost your app’s ranking in the different app stores of the most-used mobile operating systems.

In Spain, around 21 million people between 16 and 65 years old have a smartphone, and they spend using their device 2:34 hours a day on average. They usually download an average amount of 2 apps each month, and use at least 9 apps monthly.

In Spain, around 21 million people between 16 and 65 years old have a smartphone, and they spend using their device 2:34 hours a day on average 🤳Click To Tweet

Brands use apps in multiple ways, depending on their purpose. For example, there are native apps exclusively developed as an end in itself: the messaging service WhatsApp, or the Candy Crash game. Others aim to present an alternative to the traditional website as a mobile-friendly version: faster and more usable. For example, the apps of ASOS or Zara, which you can use to buy their products from your device.

The primary business models encountered in mobile applications are:

To be able to benefit from all of this, it’s important to only position the app outside the mobile world, but also get good rankings within the mobile app stores, using ASO techniques. 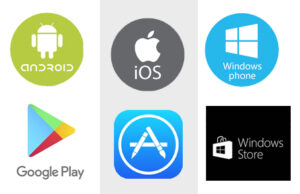 App stores, besides being almost an inevitable step in the acquisition of apps, are a place of discovery. Many users discover apps through searches made directly in the app stores, according to this Forrester study, who estimate that around 63% of all downloads are made through searches.

App stores, besides being almost a mandatory step if you intend to acquire an app, are a place of discovery 💡Click To Tweet

Although the app stores pictured in the above image aren’t the only ones that exist, they are the most important ones, and in this post we are going to focus on talking about ASO for the Play Store and the App Store, to analyse the ASO aspects we can control.

Factors inherently related to the app in terms of ASO

These are factors we can control through the design and programming of the app itself, or the upload process to the store. Google Play and the App Store work in somewhat different ways, and even their detail pages have different fields.

Name of the app

The name of the app should contain –insofar as possible– a keyword describing its primary purpose. It won’t always be possible, either for branding reasons or otherwise, but it’s a factor that is taken into account for rankings, so we should keep that in mind. If we use the app’s name, we’ll have to invest much more money into advertising, and get it out there without counting on the support of related searches, just as with any new service or brand.

In any case, a practice you should never, ever include in your strategy is to use a competitor’s brand to try and improve your ASO, as it is severely penalised, and can even result in being banned from the app stores.

☝A practice you should never, ever include in your strategy is to use a competitor's brand to try and improve your ASO, as it is penalised and can get you banned from the app stores ☝Click To Tweet

This field is only available in the App Store. It is limited to 100 characters, which we can use to enter keywords that better describe the purpose or features of our application. This field is not visible to users, and it’s only available within the admin area of the app store.

Google allows you to describe your app in up to 80 characters. This field can be seen in the detail screen with the app’s summary in the Play Store. It affects ASO in terms of search and conversion. 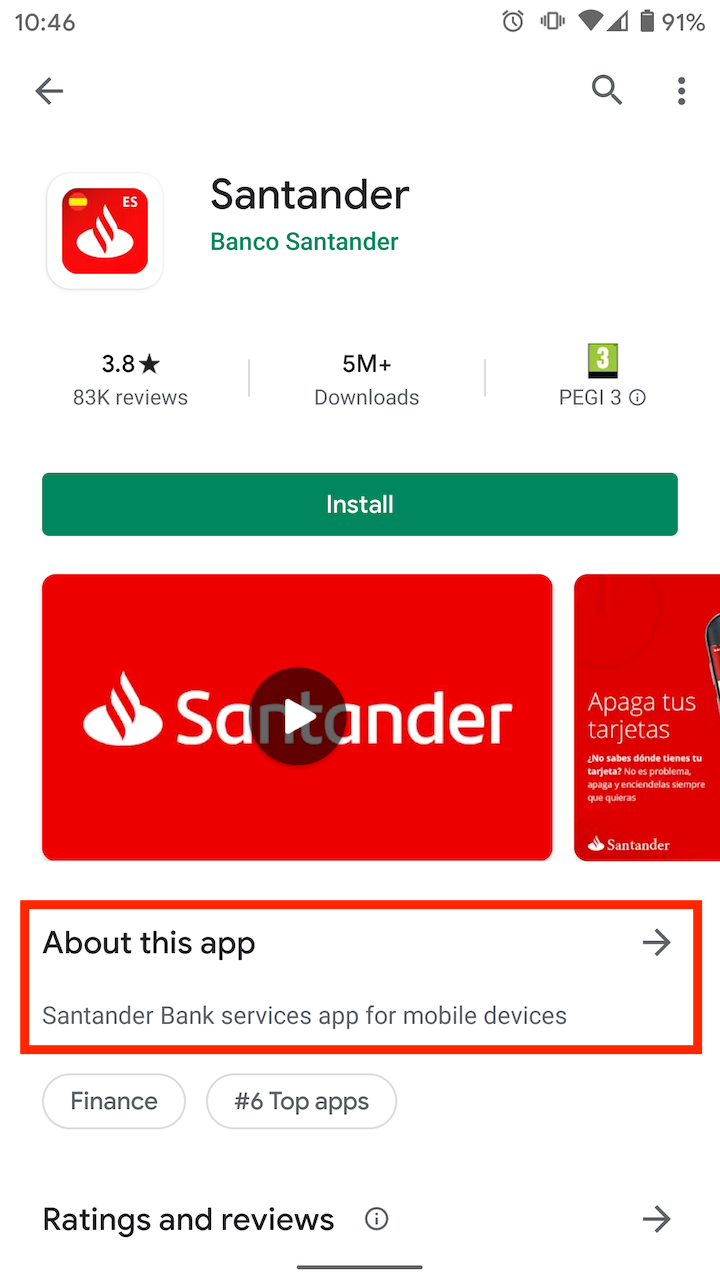 The category is the section into which you have to classify your app.

While this isn’t going to help you position your app on its own, the more relevant and precise is your choice, the more possibilities you’ll have of your users finding you.

An icon helps conversion (download). With an attractive, clean and trendy design we’ll have more possibilities of catching the user’s attention, as it will provide us with a more professional appearance and it will better transmit our essence.

Screenshots of your app will help you explain to your users what they are going to find: its features, and its attractive design or ease of use. They also contribute to improving conversion rate. It’s important to keep in mind that only the first two screenshots are visible at first glance, and 60% of users won’t scroll any further. For that reason, it’s important to use the most representative screenshots that better describe your app at the beginning.

Play Store allows you to add a promotional video that will play automatically on top of your app’s description, as an interactive banner of sorts. This video is an ASO factor, which has a direct influence on conversion, and it can persuade the user to download your app. 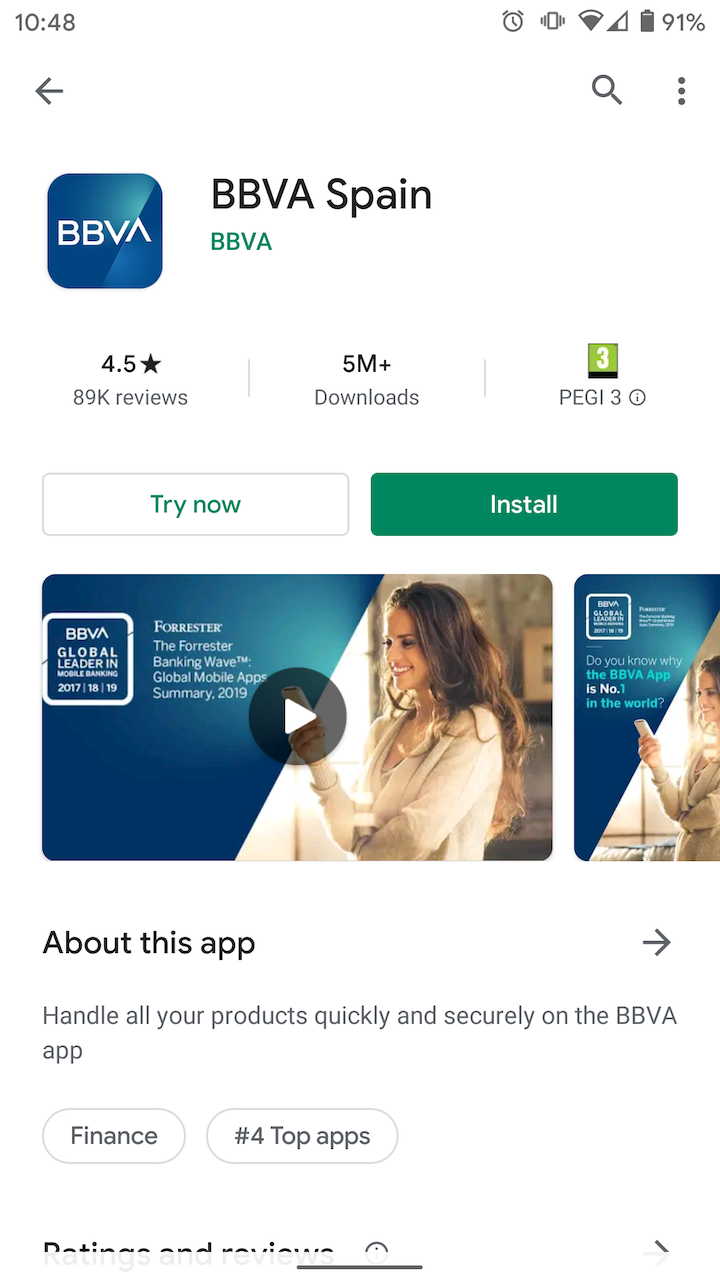 The size of your app is information that can is publicly available for your users before they download the app from Google Play. A large size can discourage users from downloading the app for many reasons: it takes too long to download, mobile data limitation, etc. Optimise your app’s size to increase conversion.

These are factors that are not related to how your app is built. They are external factors to the code or design of your app, even though they have a direct relationship to it.

The more installations a mobile application gets, the more chances it has to rank better. Google Play displays an estimate number of downloads, which is why this factor directly influences conversion.

The more installations a mobile application gets, the more chances it has to rank better 🔝 #ASOClick To Tweet

In that sense, it’s easy to fall into the trap of short-term solutions that will not benefit us: widely-broadcast promo actions promising rewards, different advantages, discounts, etc. These will boost our downloads in a very short time, but they could also increase the number of uninstalls if we don’t define what these rewards will be, or we don’t advertise them via the appropriate channels. We could end up attracting users who do not belong to our target audience.

According to the Yearly Mobile Marketing Study by IAB Spain, we uninstall apps due to lack of use (62%), because they weren’t what we expected (46%) or because their size took up too much space in our storage (39%). Uninstalls are also a negative ranking factor, so we advise you to keep an eye on this.

According to the Yearly Mobile Marketing Study by IAB Spain, we uninstall apps due to lack of use (62%), because they weren't what we expected (46%) or because their size was too heavy (39%) #ASOClick To Tweet

One of the most important off-metadata factors is the users’ engagement with the app. If users recurrently access the app, Google will keep that in mind to rank it on top of others. It’s beneficial to take this into account throughout the design process of the app or when rolling out subsequent versions. For example, by incorporating exclusive features or those particularly useful for mobile users we’ll encourage them to return to our app more.

The average rating of an app is an off-metadata factor mainly influencing conversion. A user trusts an app more if it has a good rating. It is obtained by calculating the average value of all ratings it receives.

Reviews are a hard to control ASO factor, but they also bear a considerable weight on your app’s capacity to convert. If the average rating is not enough for a user looking into downloading your app to make the decision (while all the other aspects agree with them), it is very likely they will check out what others say to seal the deal. Here the key will be to listen to what your audience says, provide support, and to be open to introduce timely improvements and/or corrections, as long as they make sense and are necessary, to maintain a good rating and image.

This is a conversion-related ASO factor. Third-party references (bloggers and media outlets) are great for getting our app known and prompting its download. Therefore, promoting our app on websites and thematically-related (finances) or complementary apps (leisure) can indirectly improve our ranking, if the number of downloads grows.

Factors with a direct bearing on your app’s growth

To summarise, out of the elements explained in previous paragraphs, we can say that there are two types of factors:

This differentiation can be further broken down into whether we’re talking about the Apple’s App Store (iOS devices) or Google’s Play Store (Android devices).

In the App Store (iOS)

In the App Store (iOS)

Tools for analysing the application rankings

There are tools that will help you work on the ASO of your app throughout all its phases. From the consultation to the analysis of results. Shall we see a few?

In order to find the appropriate keyword to optimise your description, name or the keyword field itself based on the search queries users more frequently employ, we can count on the help of various tools:

There are multiple tools that will help you make the right decisions and evaluate the development of your app’s rankings as opposed to its direct competitors. For the most part, analysing data from the App Store and the Play Store should be enough. They compare ASO factors that are public, and in some of them, if we link our respective marketplace accounts, we can get other non-publicly available data, such as the keyword field (not available for analysing your competition, though).

Below are some useful tools for you to check out:

APPly it to your own scenario

ASO, just as any other online marketing discipline, is not easy to sum up in one post or guide, but there are plenty of resources where you can get more information, like this 2016 ASO Guide (in Spanish) I highly recommend.

In the end, the best way to learn and gain experience is practice and trial and error. I encourage you to apply everything you’ve learned in this article to your own ASO strategy.